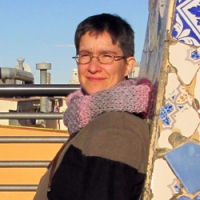 Global Historian Focusing on Migration, Minorities, and Nationalism in the Postwar Period

In 2015-16, she was a Max Weber Fellow at the European University Institute in Florence, Italy, where she was affiliated with the Robert Schuman Centre for Advanced Studies in the thematic research group on Citizenship and Migration.

She specializes in the social and political history of the migrant experience in postwar Europe, nationalism, and Islam in Europe.

Her doctoral dissertation, The Muslim Struggle for Civil Rights in Spain: Promoting Democracy through Migrant Engagement, 1985-2010, was published in 2014 by Sussex Academic Press.

Her current research interests include tracing the origins and comparing nativist discourses in postwar Europe.

COVID19 CSUF Department of History. How do you cope with virtual instruction and campus closures?

ASPHS Meeting Toronto, April 23-26, 2020. “What is a Modern Democratic Garden? And for Whom? Ordinary Spaniards Discuss the Meaning of Urban Gardens and Livable Cities Under Franco”

Talk at CSUF - Dec. 10, 2018, PLS360. The Universal Declaration of Human Rights is Turning 70
"The Concept of Nativism and Anti-Immigrant Sentiments in Europe". New Publication