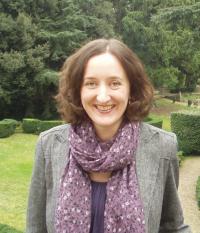 Thanks for visiting this website! I'm a historian specialising in Renaissance and early modern Europe and work at Swansea University, UK, where I'm Associate Professor in History and Heritage.

This site is now archived. For updates on my work please visit www.catherinefletcher.info.

My book Our Man in Rome, about Henry VIII’s last ambassador to the papal court, Gregorio Casali, tells the inside story of Henry's divorce from Catherine of Aragon from the ambassador's point of view. The paperback edition was retitled The Divorce of Henry VIII... go to the Our Man in Rome page to read more.

My new book project centres on the bloody rise to power of papal nephew Alessandro de' Medici: you can read all about it as the project progresses over on the Project Alex blog.

I was a historical adviser on the TV adaptation of Hilary Mantel's books Wolf Hall and Bring Up The Bodies, broadcast on BBC2 in 2015. My work's been featured in the Sunday Telegraph, the Daily Mail, and BBC History Extra. I've written articles reflecting on the series for The Conversation and History Matters and been interviewed at QueenAnneBoleyn.com.

Listen to me talking about Our Man in Rome:

For more information about my academic research project Our Men in Rome: Ambassadors and Agents at the Papal Court, 1450-1530 click here. The book from this project, Diplomacy in Renaissance Rome will be published by Cambridge University Press in 2015.

BBC New Generation Thinkers. I've been selected as one of the BBC's ten featured early career academics for 2015.
Upcoming talks. From Wolf Hall to Medici Florence, I have several talks coming up in spring 2015.
In Our Time - The Medici. I discussed the Medici family on BBC Radio 4. Broadcast Boxing Day 2013: podcast now available.

Divorce of Henry VIII: paperback out February 2013. Vintage Books published a paperback edition of The Divorce of Henry VIII: The Untold Story.
In Our Time: The House of Borgia. I discussed the Borgia Pope Alexander VI and his children on BBC Radio 4, 9am on Thursday 22 November. Click through for a link to the programme.
"Stylish and captivating". Steve Donoghue reviews The Divorce of Henry VIII in Open Letters Monthly.
"A Machiavellian with morals?". Professor Eric Ives reviews Our Man in Rome in History Today.
"A scholarly but wonderfully entertaining book. It proves beyond any doubt that the reality of Tudor history is far more interesting and exciting than the fictions." Jonathan Wright reviews Our Man in Rome in the Herald.

"A glittering debut. Fletcher's book is at its best in her account of precisely what it meant to be an ambassador in those treacherous times." Miranda Seymour reviews Our Man in Rome in The Sunday Times.
Hilary Mantel, author of Wolf Hall, on Our Man in Rome. "An eye-opening book, an intricate and fascinating story of an elusive man with an impossible job. A brilliant and impressive feat of original research, and necessary reading for anyone fascinated by the story of Henry’s divorce..."
"A marvel of close-up detective work". Duncan Fallowell reviews Our Man in Rome in the Daily Express, Friday 3 February 2012.

"Reclaims a period of history all too often simplified... a cracking story". Sarah Vine reviews Our Man in Rome in The Times, Saturday 4 February 2012.