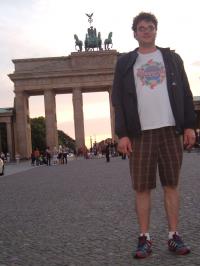 Current Position: I am a Max Weber Post-Doctoral Fellow at the European University Institute in Florence, Italy.
Research Profile:
I am an interdisciplinary Political Scientist and I work in a variety of areas: experimental political economy, the political economy of corruption, party systems, political behavior, public opinion and issues of measurement in social science, and applied social choice.
Education:
I hold a Ph.D. in Political Science and an M.A. in Mathematical Behavioral Sciences from the University of California, Irvine. My dissertation, ‘Essays in Political Economy’ is diverse, ranging from social choice to experimental economics to the measurement of party systems. My committee consisted of Professors Bernard Grofman (chair), Donald Saari (Economics), Anthony McGann, Marek Kaminski and Michael McBride (Economics). I also hold an M.Sc. in Economics from Universitat Pompeu Fabra and a B.A. from Hiram College.
Publications:
I have articles in print or forthcoming in Electoral Studies (solo), Political Behavior (joint with Christopher Stout), Party Politics, Judicature, and Presidential Studies Quarterly (all joint with Bernard Grofman), as well as a number of additional manuscripts under submission, and several others which are at the advanced working paper stage.
Teaching:
I have worked as a teaching assistant for introductory statistics for social sciences, Social Sciences Honors and the American Presidency. My teaching interests include Comparative Political Economy, Game Theory for Political Scientists, Experimental Social Science, Research Design, and the United States in a Comparative Perspective.