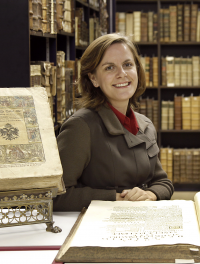 Violet Soen is an Associate Professor in Early Modern History at the University of Leuven, Belgium. She is Editor-in-chief of the series Habsburg Worlds at Brepols Publishers at Co-Editor-in-Chief of the Journal of Early Modern Christianity. In 2018, she was visiting P.P. Rubens-Professor at UC Berkeley, after earlier fellowships at Columbia University (New York), EUI (Florence), EHESS (Paris) and UPFH (Valenciennes).

Her fields of expertise include religious war and peace, inquisition and reconciliation, and the Catholic and Protestant Reformations in the Early Modern World. In this context she explores the methodological advantages of transregional history and the crossovers between history and civil society. She has coedited a dozen volumes in the field of Habsburg, Reformation and Borderlands studies.

She is the author of two award-winning monographs, Vredehandel on Habsburg attempts at peace and reconciliation during the Dutch Revolt (Amsterdam University Press in 2012) and Geen pardon zodner paus! on the sixteenth-century inquisition in the Low Countries (Royal Flemish Academy of Belgium in 2007). Her latest book Geschiedenis is een werkwoord (University Press Leuven, second edition 2021) is a manual to introduce first-year students to the historian's craft. She published more than eighty articles and book chapters in English, French, Spanish and Dutch, and occasionally Italian.

She sits on the editorial board of the Revue d'Histoire ecclésiastique-The Louvain Journal for Church History, The Early Modern Low Countries, Refo500 Academic Studies. She is board member of the Reformation Research Consortium, and Red Columnaria. She obtained research funding from the H2020-scheme, FWO and KU Leuven.

Violet Soen is an active science communicator and campaigner for citizen science. She is involved in communicating the understanding of early modern religious history in writing and through appearances in various media outlets.

Transregional Trilogy out: Transregional Reformations (2019), Transregional Territories (2020), Noblesses transrégionales (2021). Transregional Territories. Crossing Borders in and beyond the early modern Low Countries, Habsburg Worlds 2, Brepols, 2020
Project database online: Check out: IMPRESSA CATHOLICA CAMERACENSIA (ICC) . A Database on the Religious Book and its Networks in the Ecclesiastical Province of Cambrai (1559–1659)
Interviewed by Virtus: Journal of Nobility Studies... on my favourite themes: noble families, borders and the functions of history

Second edition for my manual 'Introduction into historical research'.

New volume out on Church, Reform and Censorship in the Habsburg Low Countries (Brepols 2017).